Lots and Lots of background and history...if that's what you're into.  ENJOY! 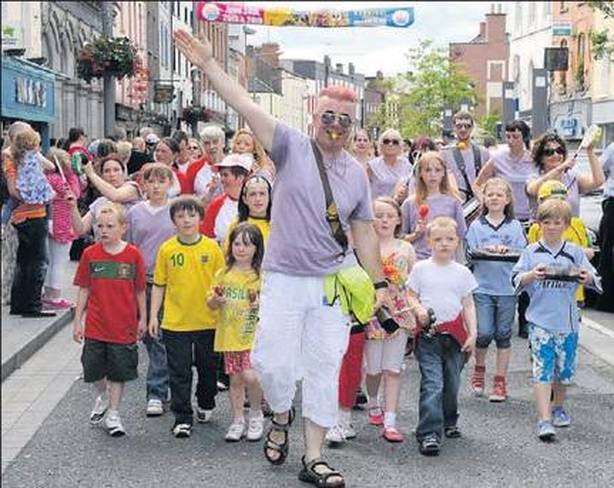 Kada Ka Boom Arts was created on Tuesday 5th May 1998.  About half past ten.  The motivation for its creation was to focus the many different energies of Kieran Gallagher into one entity and possibly give him a job.   Having had experience of facilitating workshops in drumming, community arts and drama it was time to give it a go.

With the support of the Drogheda Partnership Services’ “Back to Work Allowance” and the country finest samba group of the time “Céol Batucada”, off he went.
Initially through Kada Ka Boom Arts, Kieran facilitated Samba Drumming workshops to a whole host of groups; theatrical groups young and old, youth reach organisations, secondary schools and primary schools, men’s groups, women’s groups, senior citizens groups, circus groups and indeed other samba bands.  There was a huge variety in the type of people Kieran got to meet.
This lead on to Kieran acquiring new skills; artist and musician, Rob Welsh from Scotland, came to Drogheda and facilitated a workshop in costume making using the material Plasterzote.  This is foam-like material that comes in many different colours.  It can be twisted, cut, bended and melted together to make some very interesting creations.  Kieran learned the skills of working with this material and then brought this into the repertoire of Kada Ka Boom Arts, thus expanding its skills base.
On another occasion Kada Ka Boom Arts was asked to facilitate a music workshop in a local secondary school.  For reasons that couldn’t be helped, Kieran was unable to get his hands on a set of Samba Drums.  He arrived with a bag of sticks to the class and he improvised, using the tables, chairs, legs and floor as the percussion instruments.  And once again Kada Ka Boom Arts’ repertoire expanded.
The years went on in a similar way with new skills being acquired continually and organically.  New artists and musicians would learn from what Kada Ka Boom Arts was doing and in turn, would teach Kada Ka Boom Arts in return.  The artist, percussionist, performer and all round groovy dude, Aideen Gallagher, having first been introduced to samba music by Kieran, returned to teach him a little about body grooves.  This is the art of making cool rhythms by just using the human body.  Again, Kada Ka Boom Arts just gets a little more interesting
In 2000, courtesy of a County Meath primary school principal, Mr Colm Devlin, Kieran was asked to facilitate a workshop for a group of primary school teachers.  The teachers were looking for something new that they could bring into their class (5-12year olds) and include in their music curriculum.  The workshop Kieran developed was received very positively and lead onto Kada Ka Boom Arts being asked to facilitate a week-long course to be included in the Department of Education and Science             SUMMER TEACHER EDUCATION SECTION COURSES FOR PRIMARY TEACHERS.  The course “Music from Scratch through Samba Drumming and Percussion” has now been delivered, more than 30 times in education centers nationwide.
In 2001, Kada Ka Boom Arts was asked to design and create a hat - but no ordinary hat! This hat would be worn by the host of the Dún Laoghaire Festival of World Cultures Garden Party.
The Hat needed to be tall, bright, loud, eye catching and full of flowers.  And so it was done! Better than that, the wearer of the hat became Kieran Gallagher himself as he hosted and announced the performers and acts of the festival in the park.  And yet another string to Kada Ka Boom Arts bow was born; the MC.
Not only did Kieran, master of ceremonies, happen but this coincided with the creation of the first of the five Mad Hatters hats.  The following year, 2001, the Drogheda Samba Festival played host to the world premier performance of “The Mad Hatters”! The five percussionists performed and played all over the town in five of the most over-the-top, bright and loud, 3 foot tall, flower adorned hats the town had ever seen.  From their first appearances in the Drogheda market at the Samba Festival, the group went to perform all over Ireland - North, South, East and West, appearing at festivals and events throughout the country.  In 2008 they were invited to perform in Áras an Uachtaráin for the President Of Ireland, Mary McAleese, as she hosted a very special garden party.  It turned out to be a fantastic way to celebrate Kada Ka Boom Arts’ tenth anniversary.
Kada Ka Boom Arts and Kieran, continue to work, make, create, meet, exchange, perform and play in all of its forms,  hopefully, nah! ...  definitely making life a little more musically colourful. 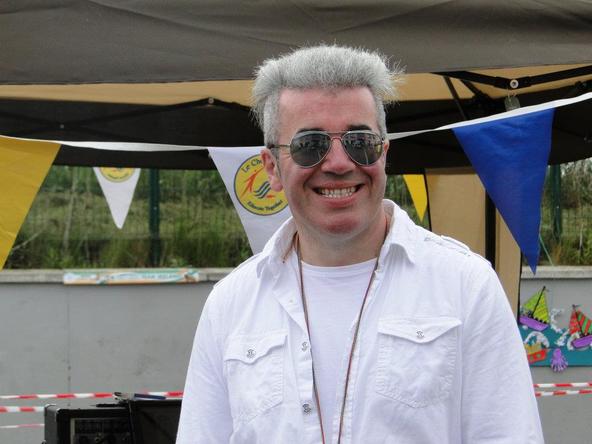 Kieran Gallagher.  Chief Bottle Washer.  Kada Ka Boom Arts.
Kieran has been working professionally as a musician for over nineteen years.  His work today includes performing, entertaining, hosting, composing and teaching.  It was during his teenage years, when he first started strumming the guitar that music officially started to have an impact on his life.

Let’s leave out the many happy years spent growing long hair and screeching out heavy metal songs in his mates’ dad’s very cold garage.  It was the early part of 1994, performance wise, that his musical background started to take shape when he started playing and singing as the front man of the ‘Powder Keg Blues Band’.  This group brought him all over the country performing at many of the internationally recognised blues festivals in Ireland.
In the summer of 1994, he became an integral part of Ireland’s first and most prolific samba group, ‘Ceol Batucada’.  “This live on the street music was fresh and new to Irish audiences at the time.  Its infectious groove just encouraged me to seek out more”, explained Kieran
In 1996, the group traveled to Manchester for a weekend’s intensive training in the street rhythms of Samba music; “Encontro 96!”  It was facilitated by Brazilian percussionist Dudu Tucci.  The weekend and Dudu himself, had a huge impact on their lives.
Kieran went on to study under Dudu Tucci.  Over three years he learned and explored the ‘Roots of Brazil.’ This took in much of Samba’s African origins and covered a host of African and Brazilian percussion instruments.  “It was the first time in Ireland or the UK that the knowledge of samba had the opportunity to be taught in such a holistic way.  It made a huge impression on all of the participants of that first course.”  On finishing the course, Kieran was fully equipped to work professionally as a musician/percussionist.
On a community level, Kieran took up two new roles.  Firstly, he decided to undertake a National University of Ireland course entitled Community Development and Leadership, based at NUI Maynooth.  Among other things, this two year course enhanced his facilitation skills as well as broadening his awareness of community development.
Secondly, he became involved with the youth organisation Drogheda Youth Development.  Its work gave Kieran experience in the area of creative youth work.  Drama, movement and visual arts workshops became part of the norm.  Both learning and teaching at the same time, it was all hands-on stuff.  He went on to become chairperson of the Drogheda Youth Development.  “As chairperson, it presented me with the opportunity to see community development in a new light, particularly in the area of funding and people management; two essential elements in any community organisation”.
In 1998 Kada Ka Boom Arts was born.  Through this he facilitates workshops in community music, samba percussion, community arts and costume creations.
“With much of my recent work taking place in the primary schools of Ireland I have gained a great deal of experience in how to teach musical skills to children.  The music curriculum in Ireland is very open and covers many areas but continually reinforces the core ideals of listening and responding, performing and composing.  Each of these aspects is explored in my musical workshops.”
Along the way, Kieran could be found performing on stage at the Dublin Theatre Festival in the Upstate’s production of “The Weavers”.  Also as a musician Kieran has been the percussionist with several groups; “LUA”, “The 3 P’s” and the Scottish group “Orchestra Macaroon”.  Orchestra Macaroon presented recording and performing opportunities at different events in Scotland including the BBC Sessions “Celtic Connections” and the Edinburgh Festival.  All of these groups had a common denominator; Mr Colin Blakey.  “Colin was the first man to introduce me to the world of percussion in ‘94.  He has been a tremendous influence along the way, and introduced me to, not just new artists and musicians, but new ways of looking at life”.
Part of Kieran’s life today is spent delighting audiences young and old with his group ‘The Mad Hatters’.  “For me, The Mad Hatters are the essence of Brazilian carnival mixed with the friendliness of Irish hearts.  It’s loud, it’s bright, it’s groovy and far, far too much fun.  Right up my street!”
There has been the development of The Funky Pirates and the Skeleton Crew.

But, BUT, just in case things began to get a little ordinary, in 2015 the arrival of The Absurdist Pipe Band happened.  Kieran is now a regular member of the group and can be found performing all over Scotland, Ireland and just recently, Slovenia for their Carnival.