Imagination is the name of the game. Through a serious of Costume Creation workshops Kieran works with a group on a theme.  From this they set to work on creating images. Using his skills and experience, Kieran works with the group to create a visual celebration of their idea.

The images below show several projects that used the idea of headdress and hats. Kieran encourages the participants to think three dimensional.  Some find this challenging at the start but very soon they see their creations become reality and all through the use of their own hands. Enhancing their own self-esteem

The material used is Plasterzote.  This is a safe foam like material that comes in an array of colours.  These colours are fantastic at standing out against the general environment.  You can see from images of what the potential the costumes could be.  They have an almost cartoon like effect on a parade.

Kieran organises materials and the preparation of templates when needed. The planning of the project and sessions along with the hands-on workshops are all facilitated by Kieran. 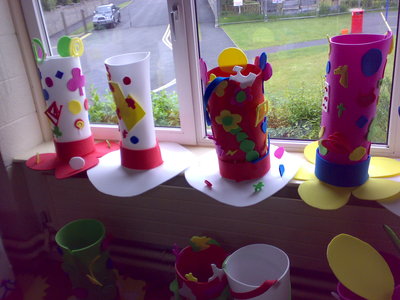 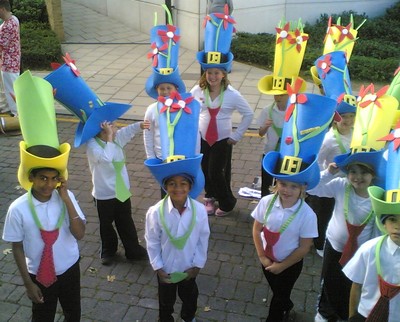 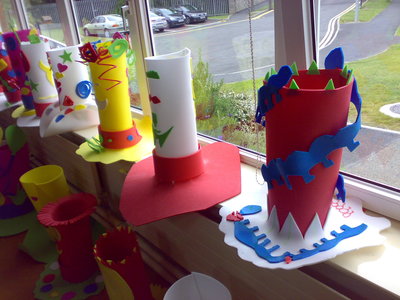 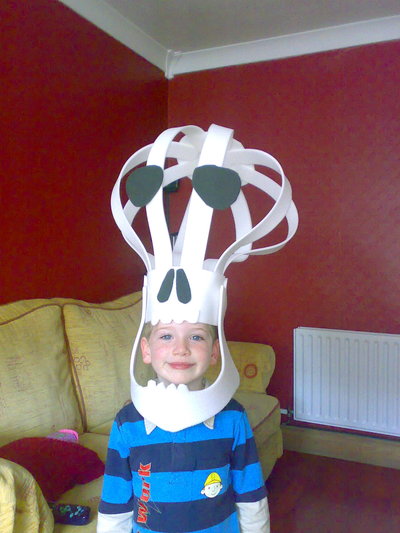 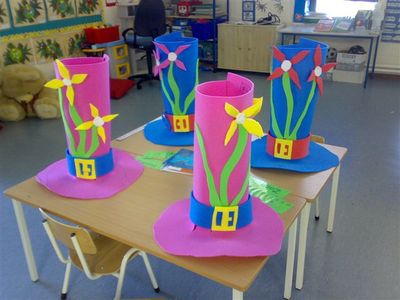 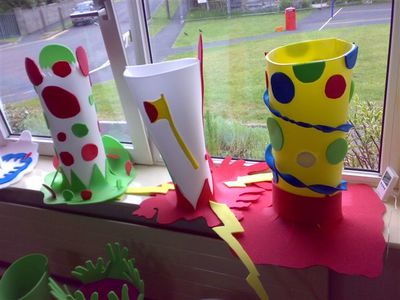 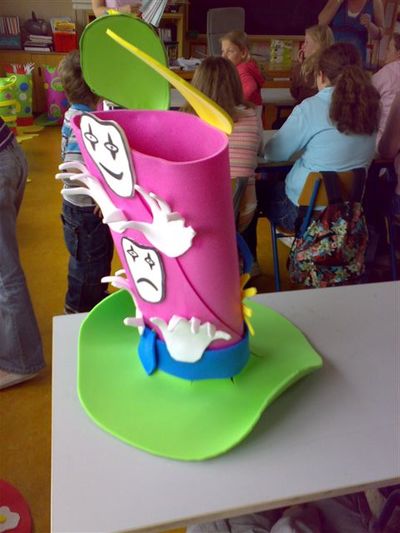 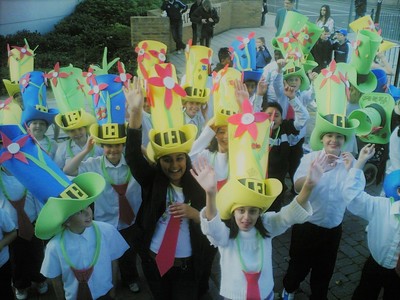 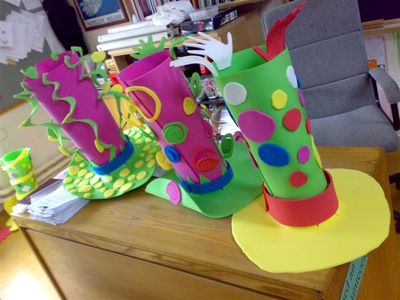 When Coca-Cola International Services in Drogheda commissioned a piece of art for its offices, the company called on its staff to engage in the process. The subsequent collaboration between staff members and the two commissioned artists resulted in a unique large-scale mural, which has surpassed the expectations of all involved.
Coca-Cola International Services opened its offices in Drogheda in 2011, with its staff providing financial services for the company worldwide. In 2013, Jack Gogarty, Coca Cola’s global finance operations, client services director, for Europe, Eurasia and Africa, wanted to create a visual expression of what the Drogheda office does.
The company called on local artist Kieran Gallagher of Kada Ka Boom Arts, who in turn asked Kilkenny artist Thomas Duffy to also come on board.
“We were trying to express our relationships with clients, to show the value and good we do but also to create something that visually represented how we felt about ourselves,” says Gogarty.
“We started with words such as innovation, partnership, diversity, quality and integrity, and the project evolved from there into something visually relevant and impactful.”

In order for that evolution to take place, staff had to be involved in the process. A group was formed from across the global financial operations team.
Gallagher and Duffy wanted to start with a blank canvas, and to create a fluid process where they worked with staff on idea generation. They facilitated workshops and ensured that each member of the team was comfortable expressing their ideas and aspirations.
“Coca-Cola had a very specific idea of what they wanted to portray, which was how the company links up with different parts of the world and their efficiency. It was a very ‘corporate’ idea at the beginning, but we wanted to get to the heart of the organisation,” says Gallagher.
“I’m a process-led artist. I start a piece of work, juggle all the factors, and in the act of juggling come out beyond what we imagined from the start. That’s what happened with the Coca-Cola project. It’s quite an engaging piece that exceeded expectations,” says Duffy.
After a number of meetings, the concept for the installation – Bridges – was born.
The artists portrayed images from around the world, but shied away from the obvious landmarks such as Big Ben and Taj Mahal. They put them into a mural comprising approximately 72 10 x 10 inch square blocks, flowing across a main wall in the building. What really brings the mural to life is an ode to the Boyne cable bridge in Drogheda, with steel cables extending out from the wall.
“The scenes are associated with various parts of the world, but you would only know them if you have been there. For example, there’s a train station in Madrid that we used, while we used an image of a chair in Paris rather than the Eiffel Tower,” says Gallagher.
Duffy adds: “It’s lovely to recognise the creativity in Coca-Cola. It’s encouraging that staff and the company are looking for ways to make their environment more stimulating and engaging.”
Such has been the impact on staff, that in a recent employee survey, all of those involved with the project said it was the thing of which they were most proud.
“It has had such amazing feedback from a whole variety of people. Our associates feel it is something they relate to, something that really represents us as a group of people, and as a significant contributor of value to Coca-Cola,” says Gogarty.

We all live in a Yellow (party) Submarine. 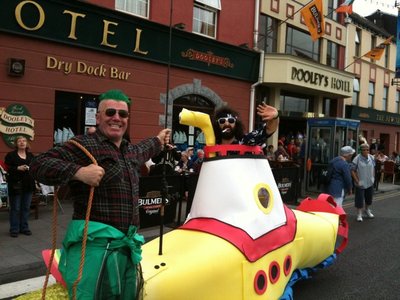 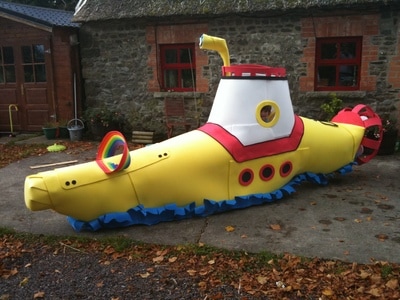 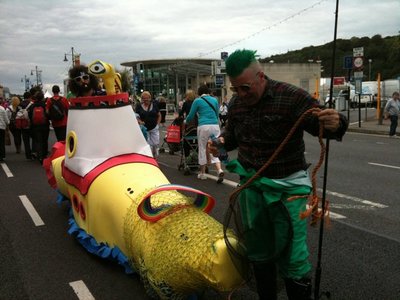 Along with individual Costume Creation projects Kada Ka Boom Arts has had on more than one occasion the opportunity to create larger projects.  “The Party Sub” came about following one of the successful Spooks Parades in 2010 that took place in Drogheda.

"The idea was that a local fisherman accidentally caught a submarine in his net.  Rather than letting the net go, he decided to bring his prize home.  The owner of the submarine seemed fine with this as long as he was allowed to continue on with the party down stairs. So, all through the streets the boom of a disco party could be heard, corks popping and apparently there was even a swimming pool down stairs!"

It grabbed so much attention that it took to the road and made an appearance at The Tall Ships in Waterford in 2011 and eventually navigated its way across Ireland to Kilmihil in County Clare for their Festival of Fun.

“On the Sunday over one hundred and twenty,  fifth and fourth class children would take over the entire main street and march and bang our way up to Ranelagh Gardens Park. There, The Mad Hatters would take over and we would have a fulfilled afternoon entertaining folk.”

Each year there was a theme, the first one was “Hot Air Balloon” as the first hot air balloon ever in Ireland took off from Ranelagh and ended up in Clontarf.  The Yellow “Party” Submarine also made it there one year. 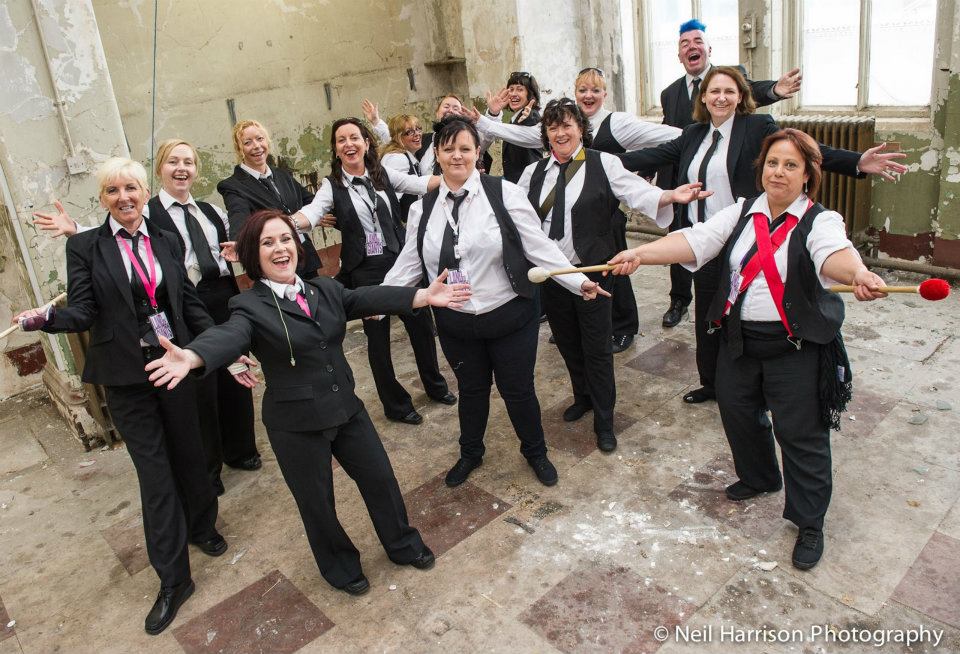 "Grabbing the buzz of banging big Samba drums, bringing smiles with the sounds of Brazils Carnival rhythms!"
Samba Mammas are a whole bunch of mammies who just happen to find themselves in a top community Samba Band.

At least, that's what we used to say.  In truth, there was a lot of work and commitment but it all started with another six week project.  This time, Kada Ka Boom Arts was approached by staff of four local Drogheda schools.  The Presentation School Ballymakenny, St. Joseph's school Sunday's gate and St. Bridget’s and St Patrick’s school Bothar Brugha.  They wanted to join forces and create a community project that parents from all of the school could participate in.  So, Kada Ka boom Arts developed a six-week project to suit requirements.  Lots of parents (mostly mammies and one dad) turned up each week and at the end we performed as part of The Spooks Parade.

The project was considered so successful that funding was sourced and the project sprouted legs.

They have performed and played at a whole lot more stuff than they would have ever thought possible.  They played in front of 18000 people at “The Land Of Giants” event at the Titanic Quarter in Belfast; at Waterford SPRAOI - one of Irelands biggest street festivals; and their very own Drogheda Samba Festival - to name but a few. Being Mammies in Ireland, they can honestly say that they know how the real world works.  So, if a performance here or there at a festival or two can add a bit of sunshine and happiness to folk’s lives, well, they make it happen.

Kada Ka Boom Arts handed over the reins to these independent ladies in 2015 and they have since gone on to receive awards for their efforts at several events.
Samba Mammas Faecbook Page
Kieran Gallagher.
Musician
Facilitator in Community Music / Samba Percussion.
Community Arts / Costume Creations